Screenshots of Northeast Ocean Data Portal maps of Coral Protection Areas designated by NOAA at Georges Bank and the Gulf of Maine in 2021. Insets: Deep-sea corals in the Northeast.

“The real power of having the data on the Northeast Ocean Data Portal is that it allows the people involved in our process to view the data on their own terms, during their own time, at the spatial resolution that they need, in combination with other datasets that are of interest to them.”

The US Secretary of Commerce in 2021 implemented the New England Fishery Management Council’s Omnibus Deep-Sea Coral Amendment to help protect deep-sea corals in the Gulf of Maine and Georges Bank. Typically found at depths greater than 150 feet on the continental shelf and slopes, in offshore canyons, and near seamounts, deep-sea corals play important roles in the ocean ecosystem, providing habitat for a diversity of other species, including many economically important fish and invertebrate species.

Because these corals are fragile and slow growing, they are particularly vulnerable to disturbance from certain types of fishing gear. At the same time, the importance and value of commercial fisheries that operate in or near areas of deep-sea coral habitat is recognized by the Council. As such, measures in the Amendment were considered in light of their benefit to corals as well as their costs to commercial fisheries. The resulting Amendment provides new protections by identifying and protecting concentrations of corals in select areas and restricting the expansion of fishing effort into some areas where corals are likely to be present.

Deep-sea corals and associated species of the northeastern US. (Photos: NOAA and Peter Auster/UConn)

Development of the Amendment took several years with extensive public involvement and collaboration with multiple entities. While the coral amendment is a New England Fishery Management Council action, it was developed in collaboration with NOAA Fisheries, the Mid-Atlantic Fishery Management Council, and the Atlantic States Marine Fisheries Commission. Because the Amendment considered a series of spatial management areas throughout the region, the Council was able to leverage the Northeast Ocean Data Portal’s existing interactive mapping tools and make new draft maps available to support the decision-making and stakeholder engagement process.

Collaboration between the Council and the Portal Working Group ramped up in early 2017, when the Council held a public workshop to review potential coral zone boundaries. The Portal contributed maps showing the extent of fishing vessel activity and areas of predicted coral habitat. Following the workshop, Council staff provided data to the Portal representing the various management “alternatives”, or design options, for coral protection zones, each defined by complex boundaries. 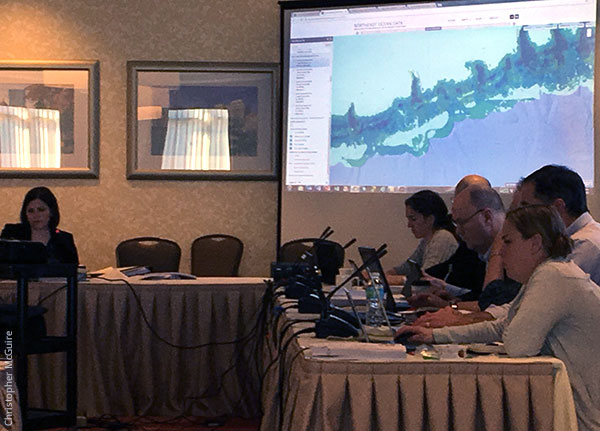 The maps were released publicly on the Portal in advance of the Council’s April 2017 meeting. Traffic on the Portal’s Data Explorer spiked that month as stakeholders viewed the coral management area alternatives online. Members of the fishing industry, environmental interest groups, and other stakeholders—along with Council members, committees, and staff—were able to review the maps in detail and to overlay other ecological and human use data. 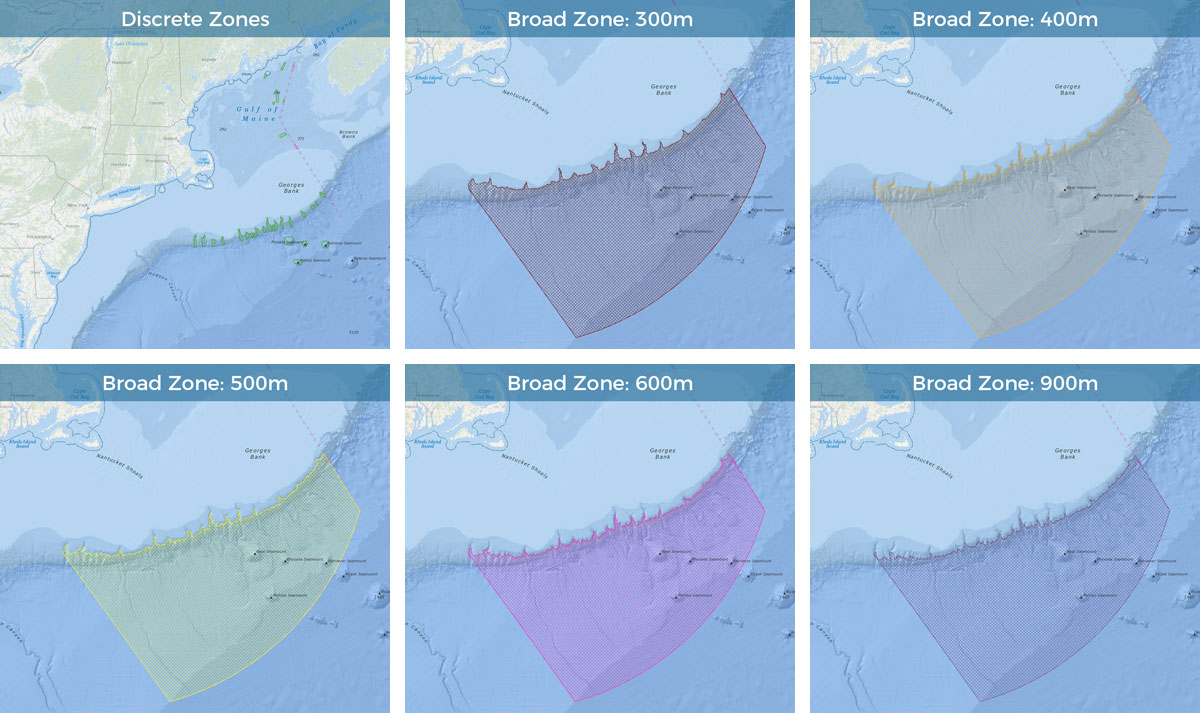 These maps show several of the initial draft alternative coral protection areas­ that were considered by the New England Fishery Management Council. Discrete Zones targeted specific locations. For the Broad Zone, a range of options were considered that differed in depth of their boundaries along the edge of Georges Bank. These draft maps were made publicly available on the Northeast Ocean Data Portal’s Data Explorer interactive map. As the Council narrowed down and revised the alternatives, the maps on the Portal were updated to reflect the changes. Outdated map layers were removed from the Data Explorer and retained in a downloadable database for reference purposes. Click on maps to view larger.

“I can’t anticipate all of the relationships people want to look for in the data and prepare a comprehensive set of static maps to cover what they are trying to visualize,” said Michelle Bachman, fishery analyst and habitat lead for the Council. The interactive maps on the Portal made it possible for the Council to address those diverse needs.

Throughout the following year as the Council reviewed and refined the coral protection zones, Council staff continued to work with the Portal Working Group to make data and information available. When draft alternatives were eliminated from consideration or boundaries were revised, updated mapping data were posted on the Data Explorer; all previous draft options for coral management areas were archived on the Portal’s Data Download page. Council members and stakeholders used the Portal as a resource prior to and during Council discussions of the alternatives and potential revisions.

At its June 2017 and January 2018 meetings, the Council finalized its selection of coral protection zones and research areas for the Gulf of Maine and continental slope, canyons, and seamounts. They submitted the Amendment document and Environmental Assessment to the National Marine Fisheries Service. Council staff and the Portal Working Group collaborated to add map layers representing the Council’s final preferred alternatives to the Portal in May 2018, along with supporting documents and material from the Council.

After NMFS reviewed and held public comment periods on the proposed Omnibus Deep-Sea Coral Amendment, the final phase of the process began in January 2020, when NOAA published in the Federal Register a proposed rule to implement the measures in the Amendment. With NOAA accepting public comments until February 2020, the NEFMC website provided a link to the Northeast Ocean Data Portal to view maps of the coral zones with other datasets.

The rule was finalized by the Department of Commerce, establishing the new Coral Protection Zones and Dedicated Habitat Research Area. The Portal’s Data Explorer continues to be a useful tool for viewing the areas, either by themselves or in combination with other types of ecological and human use data.

“The portal has proven to be an effective way to share spatial data with those who participate in the Council’s fishery management process,” said Bachman. “I really appreciate the partnership we have developed with the data portal and look forward to future collaborations.”

In this excerpt from a webinar coordinated by the NROC Ocean Planning Committee, Michelle Bachman (New England Fishery Management Council) discusses the value of the Portal for fishery management planning and stakeholder engagement.